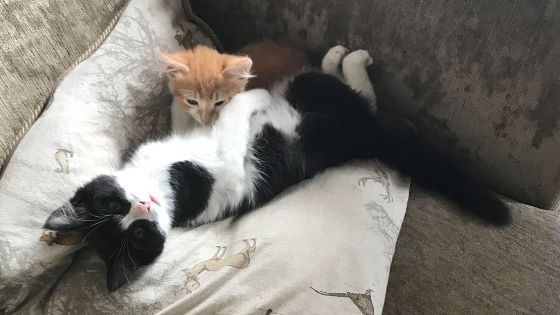 I’m a big fan of Christmas ‘cause there’s lots of nice things to eat and everyone’s in such a good mood.  I know how it all works but India’s younger than me, so I’ve had to explain it to her.  In fact, grandad and me have written a book (well, he did most of the writing ‘cause my big paws don’t work too well on the keyboard) and there’s some stories about me and India in there, including one about India’s first Christmas. It’s called Animal Turns.

Now I’ve got some other young things to explain Christmas to, ‘cause we’ve got some new kittens!  Cooper and Diego have come to live with us.  They were both a bit poorly at first but seem to be getting bigger and stronger all the time.  India and me keep getting told off for bringing mud into the house, but it’s everywhere, out there!  I’ve tried wiping my paws but Mum says that just makes it fly all over the place (it’s good fun though).

We were all a bit sad the other day because Dankey, our donkey, became very ill and died.  She was really old, even for a donkey, and they live for a VERY long time. Mum says the important thing is that Dankey’s not in pain anymore.  On the other paw (it’s like ‘on the other hand’ but with fur) we’ve got a little boy who is coming to learn with us and he’s here every day, so India and me have got somebody new to play with, which is always great.

Just a goat in a hen coop of course 🤣

Finally got them on a photo 👍 our two surprise